West Lane Textile Factory-On Friday, a textile factory operated by the company West Lane exploded in the industrial area in the outskirts of Olb City. Five people were killed and twenty people were injured. The factory was a historically designated building built in 1922 out of brick for the oil baron Sandon Donnasen. The factory had exploded previously in 1944, when a bomb dropped on it. Here's the picture of the aftermath of the 1944 explosion: 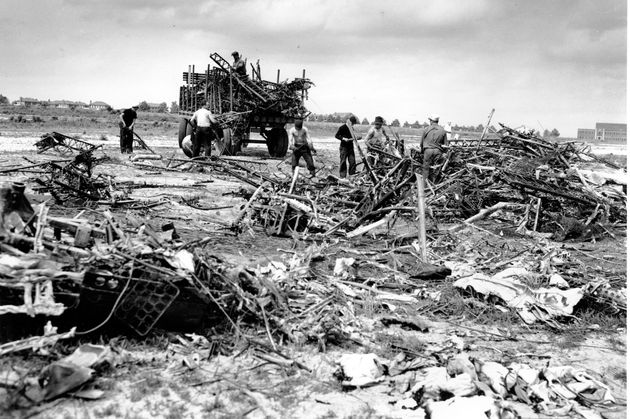 West Lane issued an official apology to the families of the workers who were killed. The factory was one of West Lane's biggest manufacturing centers in Arenztopia, and West Lane is now looking for a new property to build the factory on. “We mourn the loss of everybody who lost their lives because of this unfortunate accident, and we will persevere through these unfortunate events.", a West Lane spokesperson said.

The OCAM announced a new exhibit on tuesday on the OCAM.org website. Called the The Experience, the new exhibit turns the OCAM’s most prominent works and turns them into themed worlds that you can explore.

The Arenztopian National Gaming Team, which is the official esports team of Arenztopia, played the popular video game Among Us on monday. The game was streamed on Twitch, Instagram, Youtube, and other social media sites.

Next week should be mild, but cooler, as temperatures drop to around 12 degrees.

On Monday, the President, Lorenzo Avila, was stung three times while visiting a relative's house. The scorpion attacked unprovoked and Lorenzo was able to get it to stop stinging, but suffered a scar on the side of his chest. The scorpion escaped and is still on the loose. The ACPD is suspecting an assassination plot.

Cases declined drastically to just above 950; deaths are still hovering around 100. Safety measures were relaxed a little, allowing restaurants to have 75% capacity instead of 50%, but Lorenzo says that he will not eliminate restrictions entirely until cases have dropped to 50 or under.

On Monday, the President, Lorenzo Avila, gave a speech. It was aired on ATV and ANN. The speech addressed the coronavirus and many of the issues in the economy. Here's a quote:

We will persevere through these difficulties with the help of the populace, and in order to make a faster recovery, we need to stay safe and follow rules. Also, after we deal with this extraordinary time, we will be better at dealing with pandemics in the future.

Olb City Announcer: So how, basically, did you find these galaxies?

AS: I was looking at pictures from HIO and saw this abnormal cluster of light that wasn't there in any of the other pictures, and I showed this to my boss and he went like, “Yep, some new galaxies,” you know? And I was so excited.

OCA: What traits help you identify the galaxies?

OCA: What are the potential implications of your discovery?

AS: Obviously it means that HIO is, like, viable for galaxy-discovering, you know? But additionally, maybe there's, like, alien life on one of the planets in there, it's all very exciting.

OCA: Ok! Well, that's pretty much all! Thanks for letting us interview you!

AS: Thanks! I hope I get to come back on here someday.

This interview was edited for length and clarity.

One virus
Causing so much fear
Fear;
That is justified.

On Thursday, Albert Connidas, the famous gangster, died in prison at the age of 67. Mr. Connidas was a feared figure in the alleys of Natania City during the late 1980s and early 1990s.